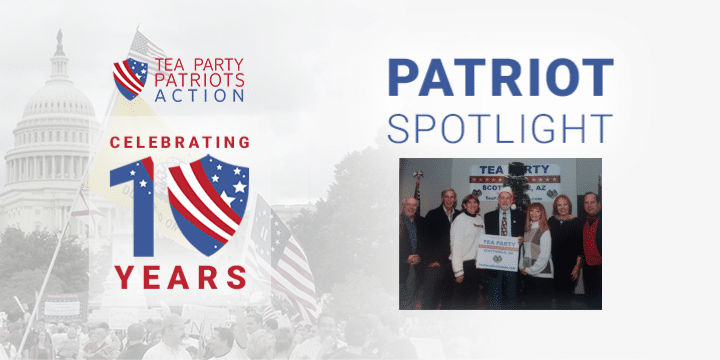 Bill Doyle was doing some chores and listening to Laura Ingraham on the radio when he heard about the Tea Party in 2009. An aerospace executive, Doyle spent his life working all around the globe, something he says gives him perspective: “that perspective informs me, without question, that this country is truly the ‘…the last best hope for mankind.’” That helped inform his decision when, after moving to Maui, he saw an ad in the Maui News about a tea party protest on Tax Day. After some prodding from his wife, Marty, the two joined the protest and became heavily involved in the Tea Party movement.

Doyle spent time on the Tea Party Maui board of directors, before becoming president of the chapter. He attended the TPP Denver Leadership Training and traveled to Washington, D.C. to discuss his chapter’s pending tax-exempt status. After his visit, the exempt status was granted, 26 months after originally filing.

After leaving Maui, the Doyles returned to Scottsdale, AZ and became involved with the Tea Party chapter there. Again, Bill served as president of his chapter, this time for four years. Since then, the couple moved to Texas and stayed involved in the movement. The two attended the Stop Socialism/Choose Freedom event in Sugar Land Town Square. Doyle remarked, “We met so many wonderful folks!”

Bill Doyle is passionate about freedom, especially in the face of socialism. “The current focus to Stop Socialism/Choose Freedom is essential for the upcoming youth who will become the next generation of voters.” We couldn’t agree more! Doyle is a model Tea Party patriot, and someone who believes in personal freedom, economic freedom, and a debt-free future.

We at Tea Party Patriots hope Bill and Marty Doyle continue their fight for freedom and encourage others to join with us as we continually remind Washington where their power comes from.