The Green New Deal is a Trojan Horse for Socialism 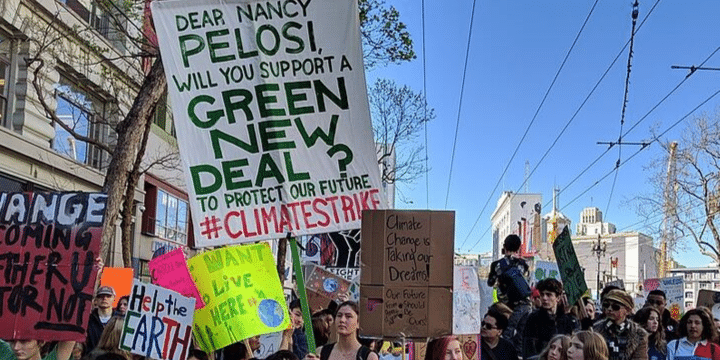 Don’t be fooled. These protesters show that they don’t really care about “climate change.” Climate change is just a foot in the door for socialism.

Washington Examiner has the details:

Their actual agenda, too, reveals that this movement is more about socialism than environmentalism. The “Shut Down DC” group leading the Washington-based protests openly touts its partnership with left-wing labor groups and even with the Democratic Socialists of America. Their demands include the implementation of the Green New Deal, a Trojan horse for socialism if there ever was one.

Ask yourself: Would a movement truly concerned with just addressing environmentalism be pushing a platform that includes socialist healthcare policy, universal government jobs, and all sorts of other leftist nonsense that has nothing to do with environmentalism? If activists really cared about climate change they would not be demanding implementation of a deal that does not include the promotion of nuclear power — the most efficient and least expensive source of emissions-free energy available.

But even on the surface, the supposed environmental activism on display this week is self-evidently disingenuous. Think about it: If activists really cared about the environment, would they be clogging up traffic for hours? It’s not exactly the best way to reduce carbon emissions.

Furthermore, to blame capitalism for so-called climate change is not only erroneous but just plain ignorant. Through a free market system, America will gradually lead to a more efficient energy system. A natural gravitation will lead to innovation, jobs, higher wages, and a healthy economy. The Green New Deal and other socialist packages will force the economy to a grinding halt and will not see a return on the extremely high investment.

Lawmakers must steer clear from any plan like the Green New Deal because it’s merely a Trojan Horse for socialism.