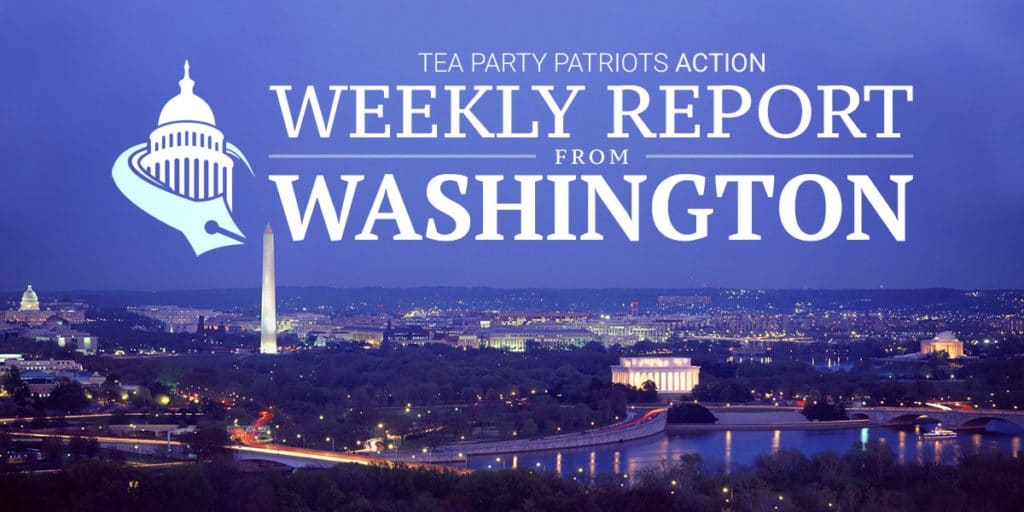 The House is in recess until Monday, January 27. The Senate will return on Tuesday and stay in session through Saturday.

The House came back to work last Monday, and took up and passed two bills under Suspension of the Rules.

On Tuesday, the House passed the Rule for consideration of H.R. 1230, the Protecting Older Workers Against Discrimination Act, and H.J. Res. 76, providing for congressional disapproval under chapter 8 of title 5, United States Code, of the rule submitted by the Department of Education relating to Borrower Defense Institutional Accountability.

On Thursday, the House took up H.J. Res. 76, the Congressional Review Act resolution of disapproval of the rule submitted by the Department of Education relating to Borrower Defense Institutional Accountability. It passed by a vote of 231-180.

The House is in recess this week.

The Senate came back to work on Monday, and voted to invoke cloture on the nomination of Peter Gaynor to be Administrator of the Federal Emergency Management Agency. On Tuesday, the Senate voted to confirm Peter Gaynor to that post.

On Thursday morning, the Senate took up H.R. 5430, the United States-Mexico-Canada-Agreement Implementation Act. The bill passed by a vote of 89-10, with all Republicans except for Sen. Pat Toomey of PA voting for it.

Then the Senate convened for the reading of the articles of impeachment against President Trump. And then all the senators were sworn in by the Chief Justice, and each went, one at a time, to the well of the Senate to sign the oath book.

Beginning Tuesday at 1 PM, the Senate will be in session for the impeachment trial of President Trump.

Majority Leader McConnell has kept his cards even closer to his vest on this one than he normally does, so we’re still not sure exactly what the procedure is going to look like. Instead, the Majority Leader’s staff sent this out:

“When impeachment proceedings resume at 1:00 PM, here’s generally what you can expect to see:

“At this point, the process could continue as above, or a unanimous consent (UC) agreement can be reached to:

“At the conclusion of the amendment process, a roll call vote will occur on:

The Supreme Court last week agreed to hear – and, presumably, decide – the question of whether or not states can require their presidential electors to cast votes for the candidates to whom they are pledged, or can they exercise their own judgment to case a vote for a candidate of their own choosing.

Both cases arose out of the aftermath of the 2016 presidential election. In both cases, the faithless electors were pledged to vote for Hillary Clinton.

Across the country, 32 of the 50 states and the District of Columbia require their presidential electors to cast their votes in the Electoral College for the candidates to whom they are pledged. Four of them have provisions in their laws allowing faithless electors to be punished, and another 11 give state officials the authority to cancel their vote or remove and replace them.

In the 2016 election, as we’ve discussed before, there were 10 faithless electors. Hillary Clinton lost five electoral votes, Donald Trump lost two, and the remaining three electoral votes were invalidated by their states.

Obviously, this could be a significant development for the 2020 race. And, anticipating your questions, should it occur that somehow or other, neither major party candidate receives the required 270 electoral votes after the election, then the election would be decided by the Congress, with the House choosing the president from among the top three finishers in the Electoral College voting, and the Senate choosing the vice president from among the top two finishers in the Electoral College voting. In the House contest for the presidency, each state casts one vote, determined by majority vote of its House delegation. As of November 15, 2018, 26 state delegations were controlled by Republicans, while 22 were controlled by Democrats, and two – Michigan and Pennsylvania – were split. I share those numbers with you just to let you know how things stand today; if we needed to go to a contingent election in the House after the 2020 election, it would be the newly-elected House that would do the voting, so the composition of those state delegations could change in the 2020 election.

Presumably, the Supreme Court will rule on the cases before the end of its current term in June.

Last Wednesday, the House voted to send the articles of impeachment and the list of House Managers to the Senate. The Managers – think of them as the House prosecutors – are Democrat Congressmen Adam Schiff, Jerry Nadler, Zoe Lofgren, Hakeem Jeffries, Val Demings, Sylvia Garcia, and Jason Crow.

On Thursday, Adam Schiff presented the articles to the Senate, and Chief Justice of the United States John Roberts was sworn in as the presiding officer for the duration of the trial. He then swore in 99 of the 100 senators en masse, and then each of the senators present went to the well of the Senate to sign the oath book. Senator James Inhofe of OK missed the day in the Senate because of a family health situation, so he will be sworn in Tuesday before the trial resumes.

On Thursday, the Government Accountability Office released a report declaring that the Trump Administration’s decision to withhold military aid to Ukraine violated the Impoundment Control Act (ICA). The report’s authors claimed that the Office of Management and Budget blocked release of the funds not as a programmatic delay but in order to advance the president’s personal agenda. That, they said, violates the law.

Democrats and the media, predictably, went nuts, claiming the GAO report “proves” that President Trump should be impeached, because he broke the law. Unfortunately for House Democrats – who jammed an entire impeachment exercise through the House in less than four months, from start to finish – neither of the two articles of impeachment they passed more than a month ago said anything about violating the Impoundment Control Act.

OMB’s lawyers see things differently. They do not believe the Trump Administration broke the law. They believe they did everything for him properly.

GAO does not have its own police force. It does not issue indictments. It does not prosecute government officials it believes have violated the law. So what good is the GAO report, then? It’s no good at all, other than as a talking point that can be used by either side – for Democrats, it’s more proof that Trump is a bad man who needs to go; for Trump, it’s more evidence that there’s a Deep State out to get him.

The Senate trial will resume at 1 PM Tuesday. At that time, we expect Majority Leader McConnell to offer his organizing resolution, and the debate will begin.

Politico: House Impeachment Managers, Who They Are And What They Do

GAO: Report On Aid To Ukraine

NRO: McCarthy: The Hole in the Impeachment Case

Politico: Trump Finally Gets His TV-Ready Lawyers — Thanks to Impeachment

WaPo: Senate GOP Hopes for a Drama-Free Impeachment Trial While Bracing for Trump and His Legal Team

AP: Senators To Be Quiet, Unplugged for Trump Trial

Hill: Democrats Conflicted Over How To Limit Trump’s War Powers

Hill: Warren: Sanders Said A Woman Could Not Win The White House

WaPo: Mike Bloomberg Wants To Be President But He Also Has A Fallback Plan To Defeat Donald Trump And Remake The Democratic Party

WE: Watch Warren Confronts Sanders After Debate Accusing Him Of Calling Her A Liar On National TV

CNN: Warren Accused Sanders In Tense Post-Debate Exchange Of Calling Her A ‘Liar’ On National TV

AP: Justices To Consider Faithless Electors, Ahead of 2020 Vote