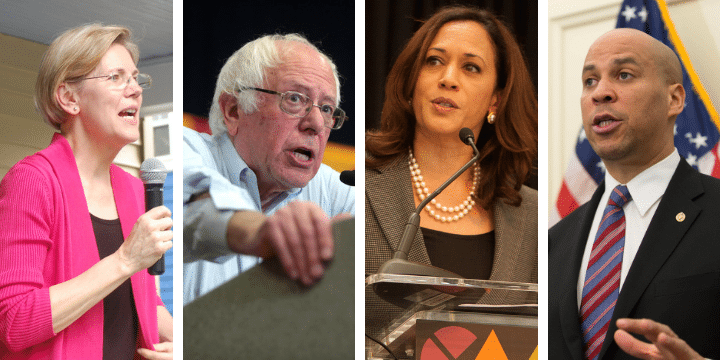 Democrats are still unable to accept the election of President Trump. For the last two years, they’ve been “resisting” and spreading a false “collusion” narrative about our president. Now, with the Democrat presidential primary heating up, they are jumping over themselves to propose radical ideas. Many of these proposals are so extreme, Democrats opposed these same policies not that long ago.

In 1983, Joe Biden called out court packing as a “bonehead idea.” He was even willing to directly call out President Franklin Roosevelt for the damage done to the Supreme Court for pushing such an idea.

However, presidential hopefuls O’Rourke, Sens. Elizabeth Warren, Cory Booker, Kamala Harris, and Kirsten Gillibrand have all indicated they are open to adding additional seats to the Supreme Court. They are barely hiding their intention to fill every seat with progressives in an effort to change the rules and make sure the radical left controls the court.

A judicial branch that respects the Constitution is a clear barrier to the left’s agenda. This is why they are infuriated they haven’t been able to take over the third branch of government.

“If you can’t win, change the rules.” Nowhere is this mantra more apparent than the left’s effort to abolish the electoral college. The United States Constitution intentionally respects the voice of every state no matter the size. This is why the U.S. Senate is composed of two members from every state. It is also why the electoral college was created. Every state receives an equal number of votes as the number of Congressmen and Senators they have, and can decide how to allocate them.

Without the electoral college, large populous states, and regions of the countries could impose their will on smaller states. The electoral college ensures that every state is given a say in the process, and forces presidential candidates to build a coalition across the nation.

However, following Democrat losses in 2000 and 2016 where Presidents Bush and Trump won the electoral college without winning the popular vote, Democrats are demanding the elimination of this Constitutional process.  This would enable Democrats to win while staying in the large populous cities and continuing to ignore the concerns and values of middle-America.

Lowering the Voting Age to 16

The latest crazy Democrat idea is to lower the voting age to 16: children who not are old enough to serve in the military, buy a house, or own a gun. The idea has been backed by Speaker Pelosi, and Beto O’Rourke recently said he was “open to the idea.” Once again, what was considered far-fetched is becoming normalized by Democrat elected officials and candidates.

While Democrats may claim to believe in border security, they continue to push open borders. Sens. Warren and Gillibrand have embraced the call for the abolition of ICE, yes one of the key agencies that secures our border and tries to stop illegal immigration. Kamala Harris is pushing for an overhaul of the agency.

Tearing Down the Border Wall

If abolishing ICE wasn’t enough for the “open borders” liberals, Beto O’Rourke has tried to demonstrate his opposition for President Trump’s border wall by calling for the walls we already have to be torn down. Sen. Gillibrand seemed open to Beto’s idea when asked about it.

When asked if he would tear down the border wall near El Paso, Texas, Beto said, “Absolutely, I’d take the wall down.”

One of the biggest lies of the Obama administration was “If you like your health care plan, you can keep it.” (PolitiFact even named it the “Lie of the Year” in 2013) It was a slogan used to push Obamacare on the nation.

Sen. Harris answered that question during a CNN town hall.

Jake Tapper: “So for people out there who like their insurance, they don’t get to keep it?”

Sen. Harris: “Let’s eliminate all of that. Let’s move on.”

As Democrats continue to run to the far left and attack our President, it is up to us to stand up to their reckless policies and protect our country. We will make sure our fellow Americans know just how radical the Democrats have become.