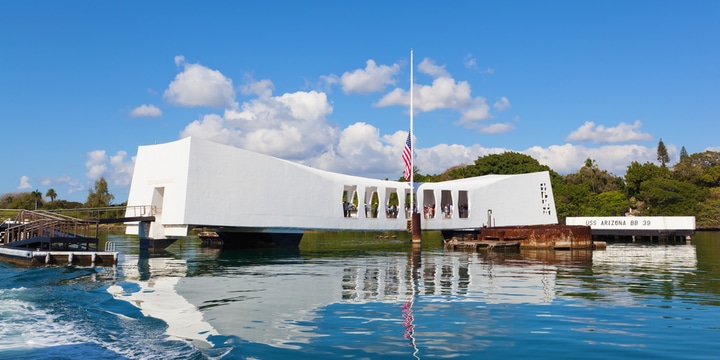 Tomorrow marks the 78th anniversary of Pearl Harbor. Not only was Pearly Harbor one of the deadliest attacks on American soil, it forced us into a war which claimed the lives of over 400,000 American servicemen and injured nearly 700,000 more. Earlier this year, Trent Reedy with the Washington Examiner had the unique honor of interviewing a Veteran who had been at the beginning and the end of the war. Gerold Lamers was there at Pearl Harbor the day the Japanese attacked, and he was there in Japan, just 20 miles south of Nagasaki when the second atomic bomb ever used exploded.

For the last several weeks, that space has been next to 96-year-old World War II veteran Gerold Lamers. More than once I’ve asked him if he’d care to share his story.

“Nobody wants to read about me,” he’d say.

I had to smile at the way he was true to the Greatest Generation, having helped save the world and then shrugging it off as though he’d done nothing special.

But I knew he’d survived the attack on Pearl Harbor, and as witnesses to that event are passing on, I thought I’d ask him one more time for his story. He warned me that his memory wasn’t what it once was, but he’d tell me what he could.

He served in the Navy Medical Corps and recalled a lot of gunfire at Pearl Harbor as he helped doctors work on patients. “You went where the action was. You protect your ass to start with. You did what you could.”

I felt inadequate for the interview. Perhaps a more experienced reporter would have known what questions to ask or how to draw Lamers’ stories from him. I merely asked how he felt about the attack.

“You knew the war was on. If you didn’t win, they’d invade our country. You want the U.S. to go on forever,” he said.

One of the reasons I wanted to hear from Lamers was because in addition to having served at Pearl Harbor on Dec. 7, 1941, he also had served south of Tokyo on Aug. 9, 1945, where he saw “sort of a red-orange colored ball about 20 miles north.”

He was there for the beginning of America’s involvement in the war, and he saw the atomic fireball rising over Nagasaki that ended it.

“When you first saw it, you wondered what it was. Then you heard it. We knew when we saw the smoke from that bomb that if it fell on Tokyo, there wouldn’t be any Tokyo left. You don’t ever forget a thing like that.”

He offered me a powdered sugar doughnut as he often did at the coffee club, and I was amazed at how casual he could be, talking about the significant historical moments he had witnessed. But then, I supposed, having lived with the memory of such events for three-quarters of a century, some of the awe I felt about them must have diminished in him.

This, being just an excerpt, provides a glimpse into the life that this incredible World War II veteran has lived. Gerold Lamers is the perfect example of the American man: humble, noble, and willing to put it all on the line for family and country. Do him the honor of reading the rest of the interview on the Washington Examiner website in remembrance of Pearl Harbor.