Patriot Spotlight: We the People… 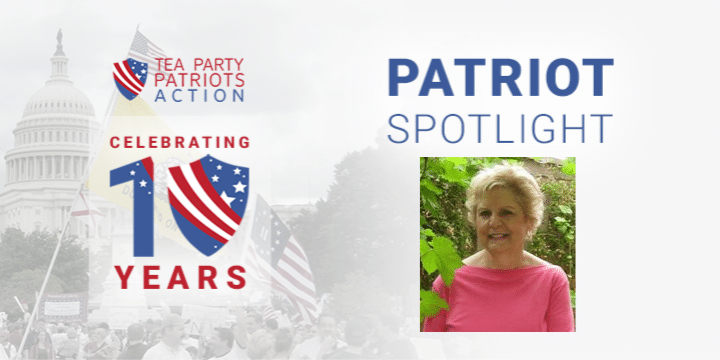 In late 2008 and early 2009, Janice Reed was very concerned about the bank bailout and saw how hard it hit many Americans nationwide. Reed began to see and understand more of what was happening to the country and how it was unraveling before her eyes.

This brought to mind her long-ago civics classes, a fierce love of country and a fear of losing it. At the time, Reed and many others began to see a level of government that was unresponsive to “We the People.”

She joined a protest on Tax Day, April 15, 2009, in Palm Desert, California. When she got there with her handmade “No Socialism!” sign, there were at least 1000 people protesting, just like her. It was a life-changing moment to see so many who felt that it was time to guide the government instead of just being observers!

This also prompted Reed to become more active in local tea party groups in California. She moved to another city and a few years later joined the newly-formed Banning Beaumont Cherry Valley Tea Party in Southern California, where she is now the vice president.

Her tea party meets monthly with guest speakers and offers a free Constitution class. Our tea party has supported several local representatives and governor candidates with rallies, sign-waving, coffees, debates, radio ads, letters-to-the-editor, press releases and community meetings. They fought California’s sanctuary state law and Beaumont was one of the first to stand up against this unconstitutional law due to the tea party protests. They even landed a minute spot on ABC News regarding their activism on the issue!

Her tea party also started a talk radio program a few years ago called “Conservative Voice Radio,” informing the listener of topics that the MSM won’t cover. They had done radio ads called “A Tea Party Minute” to explain who they are and what their Mission is about. Of late, her party began a bi-monthly newspaper called “The Neighborhood Bulletin,” in hopes of informing those in between the two parties who are either uninformed or on the fence. She hopes her party can make a difference before the 2020 election.

Over the last ten years, she’s become more knowledgeable of the Constitution and has been gratified to meet and work with so many other like-minded Patriots. She’s learned that America is a nation of good people who are generous, with a profound love of country. That’s what keeps her going! She wants to continue to be a part of this incredible movement, started with grassroots emotion and motivated by wanting to preserve what our Founders left for us.