Patriot Spotlight: The Woman That Never Gave Up 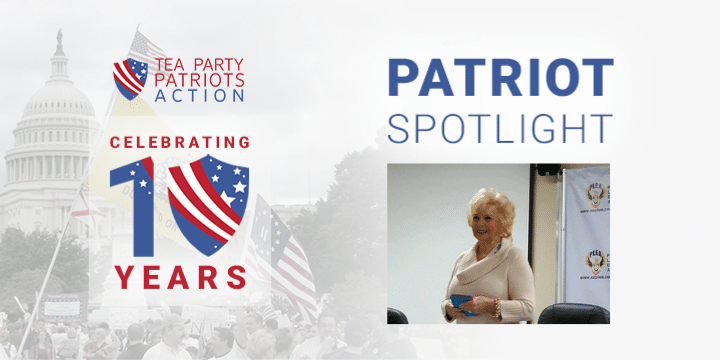 Vera Anderson had never been involved in politics before the Tea Party movement began in 2009. Her realization that she had to do something about the government’s out-of-control behavior spurred her to get involved.

Vera and other members formed the Daisy Mountain Tea Party Patriots in Anthem, AZ. Over the past ten years, Vera has devoted herself to TPP. She and her chapter covered all the major issues from ObamaCare to Common Core, attended rallies, spoke at their Capitol on bills, and met with government officials.

Vera currently is the first Vice Chair of her Legislative District and president of her local chapter of the Arizona Republican Assembly. She is also Executive Director of her newly formed organization, the Election Integrity Project Arizona.

While some patriots have had to step away from their activism for various reasons over the years, Vera has continued to fight and sees opportunities to stop socialism in its tracks with the help of Tea Party Patriots activists nationwide.

For someone who thought she didn’t have a voice when she joined the Tea Party Patriots, Vera reminds others that if she could do it, they can too, “The more support we can muster against the threat of socialism, the more we can remind the nation to choose freedom.”