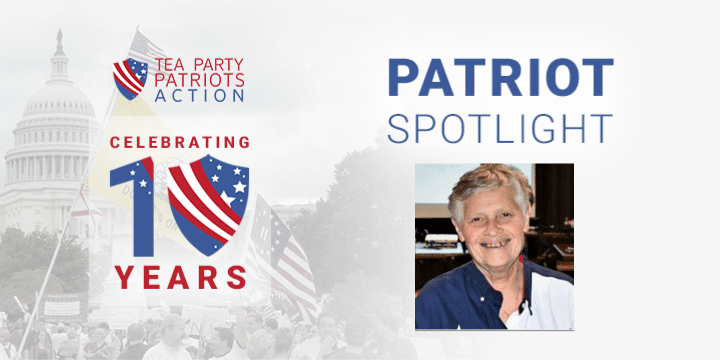 To kick off our anniversary celebrating ten years of the tea party, we are doing a weekly spotlight of our members and activists.

“It must have been an act of God,” Suzanne Guggenheim said. Ten years ago, she was sitting in her office with the TV on when the voice of Rick Santelli blasted out. She was instantly captivated and at that very moment, Suzanne decided that she was going to be part of it. She started looking everywhere online about how she could get involved and throw an upcoming “Tea Party.”

Suzanne was born in Hungary near the end of WWII and was raised in Paris. Before moving to America and becoming a citizen, she lived under Nazi, Communist, and Socialist regimes. Thinking she had left those dangerous ideologies behind, Suzanne started to recognize the growing signs here. She was 64 years old when she organized her first Tea Party group, The Woodlands Tea Party Society.

On February 27, Suzanne helped organize the first Tea Party rally in Houston. She learned about the Tea Party’s proposition for a Tax Day Tea Party on April 15th, and that’s when she knew that this would be the first of many more Tea Party events.  “Taxed Enough Already” was a rallying cry for those who could see the American people drowning in debt with no relief in sight unless they rose up and made their joined voices heard.

When over 7,000 people joined Suzanne and other tea party activists at the next local event, she heard the recurring statement, “I am so glad to finally feel that I am not alone.” People were suddenly opening their eyes to what was going on and joining to make their voices louder every day. Giving people a venue to have a voice, helping educate them on the Constitution and what was going on in Washington, DC, the Tea Party had a tremendous opportunity to be in front of it all. Suzanne said she was hooked for life!

She worked endless hours to organize and rally activists and has seen the efforts rewarded.  But with each election cycle, she hoped that enough good change would happen, and she could finally ‘retire” – not from her ideas and principles, but from the daily fight. The corruption of the political system by the Deep State and the misinformation from the education system and the media are so prevalent that her work is far from finished.

Suzanne knows the forces she and her like-minded patriots have awakened will not fade away and the Tea Party is here to stay.

Suzanne rightly notes that the tea party is “the conscience and the voice of the conservative movement,” and we thank her for all her years of service and commitment to our nation.

A Texan born in Nazi controlled France had some direct words for Congress during our rally!