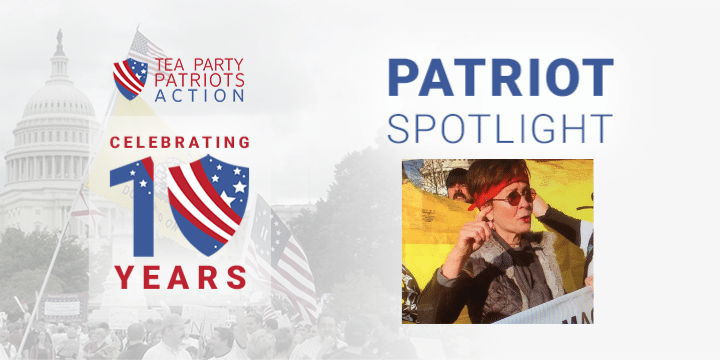 Linda Dorr was outraged when former President Obama stated he would “fundamentally change America,” after he won the 2008 election. She saw that her country was under attack from within. President Obama advocated for Obamacare which would “fundamentally” ruin healthcare for all in desperate need of it. She decided she would not turn her back because of her love for America – her home and her birthplace.

As tea parties formed nationwide, Linda worked with Jenny Beth Martin to create her own. Nationwide, she and other patriots rallied and helped to found the tea party movement. Linda was thrilled to come to Washington, D.C. for important events like the U.S. Supreme Court taking up Obamacare. Linda was outside of the Supreme Court, with other patriots, standing strong in the face of hundreds of paid, bussed-in protesters from leftwing unions and organizations like Planned Parenthood.

Those days outside of the Supreme Court were brutal. In March, it was ice cold. In June, it was hot and sunny. Linda is one tough lady and she had no problem debating the opposition, standing all day, holding signs and flags, chanting, and going toe-to-toe with socialists to defend her country.

Linda still enjoys being a part of Tea Party Patriots Action. She’s always seen it as a way to coordinate action with other patriots all across America; people like her who participate in rallies and protests to inform local communities of the grave threats facing our country from the left.

Currently running her own interior design business, Linda recently partnered with a real estate agent to remodel, stage, and sell residential homes in southern California. This week, she and her husband are celebrating their 50-year anniversary.

There will always be patriots like Linda who will fight to restore our Republic and we will continue to support her and are honored to fight alongside her!