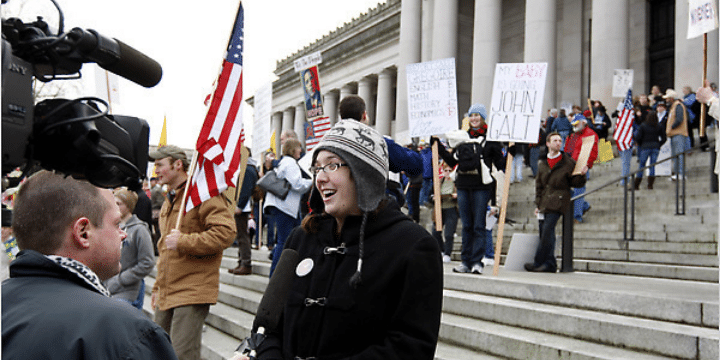 To kick off our anniversary celebrating ten years of the tea party, we are doing a weekly spotlight of our members and activists.

Our first patriot has been with the tea party since the very beginning. Keli Carender was not your typical tea party activist or conservative. At the time, she was a 29-year-old woman with a B.S. in Biology and Math and had a teaching degree in secondary math from the University of Oxford. She was heavily involved in improv and theater. She never thought she would become an activist and organizer of the tea party.

She began her activism after reading about the newly elected President Obama’s $787 billion stimulus package. It didn’t make sense to her why the government would spend money it didn’t already have. She wanted to see an atmosphere where private industry could start to grow again and create jobs. She was frustrated that every time she called her senators to urge them to vote against the stimulus bill, their mailboxes were full. She had two choices: either give up and let things turn out for the worst or do something about it.

She decided the latter and held a protest against what she called the “porkulus.” Her first protest drew only 120 people. A week later, she had 300, and six weeks later, 1,200 people gathered for a Tax Day Tea Party.

She continued to rally other like-minded patriots and gather emails for upcoming events. She and her activists finally saw they weren’t alone. One of the biggest benefits that she saw from the movement was the camaraderie. Likeminded people were working together to kill bad legislation and to restore the America they grew up with.

Ten years later, a new administration is seeing things through and draining a swamp left by eight years of a bad administration. Keli currently works with Tea Party Patriots and is now a mom who wants to see a bright future for her kids. She doesn’t want her kids to grow up in a country favoring socialist policies that take freedom and free markets away from them. She wants to continue the fight with the tea party and with Tea Party Patriots for future generations to come.

She believes the role of the tea party will always be the “Constitutional Conscience” of the country. No matter how hard the left pushes for tyranny, she and her patriots will always stand in their way.