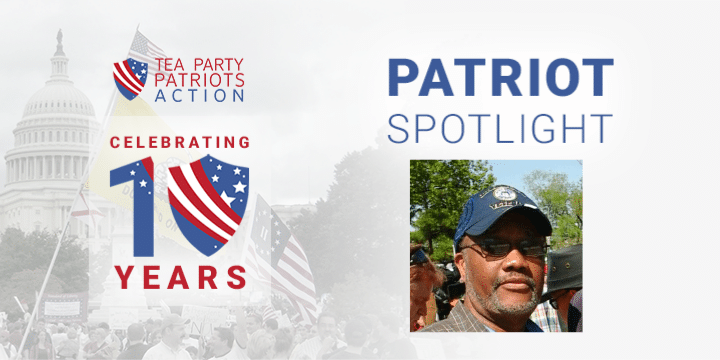 Emery McClendon started his journey of activism during the days of President Ronald Reagan. He’s an African American conservative who served in the military and as an Indiana State Trooper. He loves his country and the American Dream.

Emery was inspired by the Rick Santelli rant. As he was watching the news, he began jumping up and down because he had the same feelings and enthusiasm as Santelli about wanting to make a change. He decided to join the Tea Party movement and has been with the movement ever since.

He organized the second largest Tea Party rally in Indiana and helped to organize groups nationwide.

Since then, Emery has received several prestigious awards, including Americans for Prosperity “Activist of the Year.” He has spoken at rallies and forums nationwide as well as written on issues that affect the Tea Party cause.

The movement has meant a lot to Emery for the past ten years because it has given everyday people the opportunity to unite and have their concerns heard by local, state, and national government. He felt that it was time for Americans to take a stand, both individually and as a group. Americans needed to be heard by those who represent them in government.

Emery sees the future of the Tea Party movement becoming stronger as they continue to learn how to address the issues that affect us as a nation. Even with a new and strong administration, the rise of socialism is a major concern among those who want to preserve a free America. That new and invigorated fight against socialism is what drives Emery and all of us to the front lines. We are uniting to train each other and using our voices collectively to lobby for the cause in ways that are effective and powerful. We hope you can join patriots like Emery in the fight to keep dangerous politicians and dangerous policies from turning America into another failed socialist country.