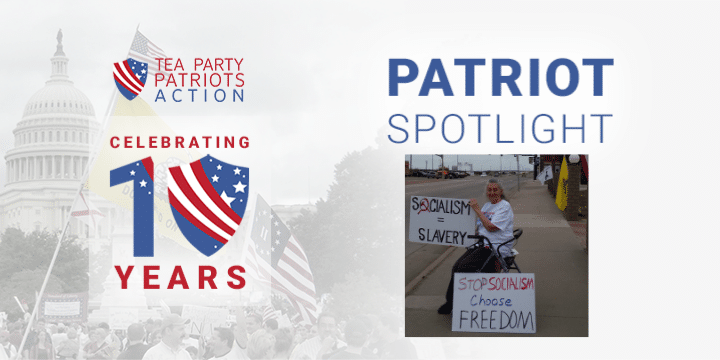 Betty Blanco had been a public school teacher and had taught everything from Spanish to home economics. Having never been involved in politics before, the emphasis on quality education became the motivator for Betty.

Betty was a single mother who raised four boys and, other than identifying herself a Democrat, wasn’t involved in politics. Her son, Jeff, became her role model and introduced her to the Tea Party. She had lived in the now-socialist country of Nicaragua and was sad to see it spiraling out of control. Obama became president and began pushing his radical policies. The more Betty learned about the rising threat of socialism in our country, the more disgruntled and aware she became.

Betty decided that it was time to get involved. She and her friends joined forces and formed the Arkansas Valley, Colorado Tea Patriots chapter. For a small town of 9000 people, they had about 300 enthusiastic people from 3 counties show up on Tax Day in 2010. Many of the speakers went on to be elected to office.

Betty never dreamed she would be involved in politics. As she looks back on the last 10 years, she is amazed by how much she and the Tea Party have accomplished and the difference they made.

Betty remains involved in the Tea Party for the sake of the next generation. She is concerned with the education of this new generation and what their future may look like. She wants to see them have a better place in which to live than she did and she wants them to be free. She wants them to know they have been endowed with the unalienable rights to life, liberty and the pursuit of happiness.

Betty and Tea Party Patriots will continue to demand a smaller government, a free market and an end to socialism.