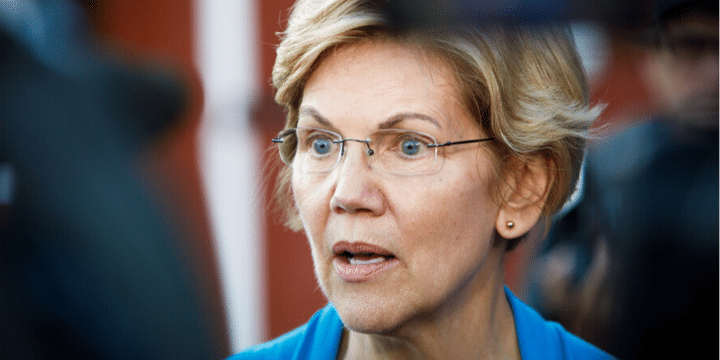 Elizabeth Warren has spent her entire presidential campaign dodging, with Muhammad Ali like precision, the question of how she intends to pay for Medicare for All. She has consistently claimed that costs will go up for the wealthy, but will go down for middle-class families. President Trump put it best when he said, “sounds good, but doesn’t work.”

Warren’s Medicare for All plan has an estimated cost of $30 trillion, according to the Committee for a Responsible Federal Budget. This same committee took a look at how Warren could possibly pay for this plan, and…well…the options aren’t good.

“Though much of this cost represents savings to the private sector, it nonetheless needs to be financed through higher taxes, lower spending, more borrowing, or some combination of the three,” the group said. One option is a 32 percent payroll tax.

Right now, most wage income is subject to a 15.3 percent payroll tax, divided evenly between workers and employers to pay for Social Security and Medicare. But a new 32 percent tax — with employers and workers each paying 16 percent on their income — could raise roughly $30 trillion over a decade, according to the budget group. It would apply to all earned income.

Warren could also impose a 25 percent surtax on adjusted gross income above the standard deduction. Households already pay from 10 percent to 37 percent of their incomes to the government, tempered by a variety of deductions and discounts, and the surtax would essentially increase the bottom-income tax rate to 35 percent and the top-income tax rate to 62 percent.

Creating a 42 percent value-added tax would also raise the $30 trillion needed to fund Medicare-for-all. Unlike most developed nations, the U.S. only taxes consumption through state and local sales taxes.

While a 42 percent federal tax on consumption, known as VAT, could be enough to raise $30 trillion over a decade, it would simultaneously raise the prices of most goods and services by 42 percent.

To finance the full cost of Medicare-for-all without hiking taxes, the government would need to cut the rest of its spending by 80 percent. That would be complicated, the group said, since “cuts of this magnitude are unrealistically large and certainly could not be imposed on a short timeline.”

One method preferred by Warren (and fellow presidential candidate Vermont Sen. Bernie Sanders, the author of Medicare-for-all) is to impose huge taxes on the wealthy, corporations and Wall Street. But there isn’t enough annual income available among the ultra-rich to finance the full cost of Medicare-for-all, the group found.

Even raising the top two income tax rates (paid by individuals who earn more $204,000 per year) to 100 percent would not generate $30 trillion over a decade.

“In reality, a tax increase that large would actually lose revenue because it would institute marginal tax rates above 100 percent when other taxes are incorporated – effectively requiring people to pay rather than be paid to work, earn business income, or sell capital assets,” the budget group said

An “extremely aggressive” package of taxes on higher earners, corporations and the financial sector could cover as much as one-third of the cost of Medicare-for-all, the committee found.

So, what’s the bottom line? Medicare for All really just means a sharp increase in taxes for all, and we think that’s something all Americans can agree we don’t want.