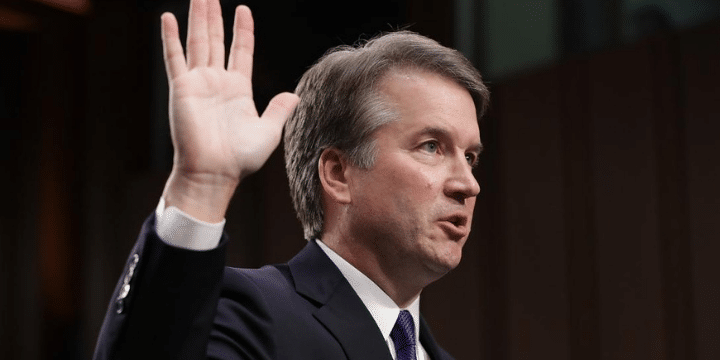 One year ago, we saw the most vicious and divisive Supreme Court confirmation battle in American history, underscored by uncorroborated claims of sexual assault at the height of the “Me Too” movement. Justice Kavanaugh was confirmed in the face of the ugliest attacks and protests ever hurled at a judicial nominee. The problem is, it could happen again. We know this because the Democrats reignited the Kavanaugh fight in September.

“I sat through those hearings. Brett Kavanaugh lied to the U.S. Senate and most importantly to the American people,” the California senator said in a tweet Sunday. “He was put on the Court through a sham process and his place on the Court is an insult to the pursuit of truth and justice. He must be impeached.”

Harris was reacting to a story Saturday in The New York Times from reporters Robin Pogrebin and Kate Kelly, who authored a forthcoming book about the justice called “The Education of Brett Kavanaugh: An Investigation.” The pair reported they reached seven individuals who could further corroborate Deborah Ramirez’s accusation.

Other 2020 Democrats have made similar comments regarding the report. “It’s more clear than ever that Brett Kavanaugh lied under oath. He should be impeached,” former Housing and Urban Development Secretary Julian Castro said on Twitter Saturday night.

“The revelations today confirm what we already knew: During his hearing, Kavanaugh faced credible accusations and likely lied to Congress,” Vermont Sen. Bernie Sanders tweeted Sunday. “I support any appropriate constitutional mechanism to hold him accountable.”

Even after the New York Times was forced to issue a massive correction to their piece about the book, none of these Democrats apologized or backed down. They don’t care about the truth, they care about destroying the Supreme Court, conservative judges, and anyone else who would stand in their way.

The NYT reporters’ muckraking did, however, backfire when their book took a nosedive on sales. Americans are sick of the constant scheming from the left that they have stopped tuning in! Let’s hope they will tune out the left if another confirmation battle turns sour again.