Hong Kong is a Reminder of Why Our Own Rights Matter 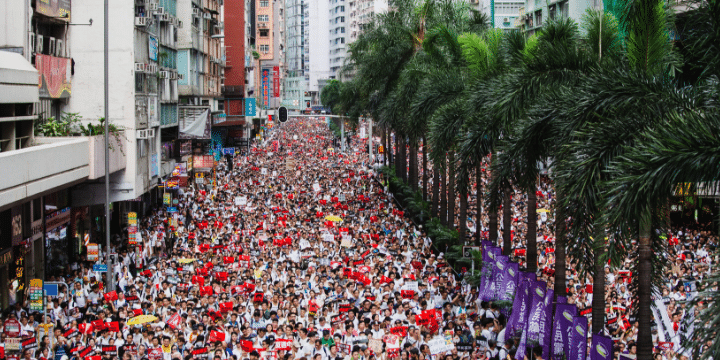 The First Amendment and the Second Amendment: why do they matter so much? Sometimes, we take for granted the rights we grew up with; the rights that make America a haven for liberty. In Hong Kong, protesters are fighting for democratic reform and for complete separation from China, a nation that prides itself as an oppressive state. Thousands have been gathering in the streets of Hong Kong to protest, and the Chinese Army responds with a promotional video showing Hong Kong troops how to “de-escalate” protests, including depicted snipers aiming their rifles at protesters.

“The people of Hong Kong want to protect our freedom, our freedom of speech, our rule of law, our judicial system, and also our economic foundation, which is welcome to international investors,” said activist and former Hong Kong legislator Lee Cheuk-yan.

So far, the Chinese government has respected the Hong Kong people’s right to protest, but for how long? Will their armies march in and force “peace” upon the island where one-quarter of its 7.3 million residents demand liberty?

A government that has control over speech and control over guns is a dangerous government. We’ve seen it in Venezuela where its people are unable to take up arms and fully regret the 2013 gun ban. The people in the failing country of Venezuela have had failed attempts to overthrow their tyrannical dictator Nicolás Maduro and gun control is partly to blame.

One of the best examples of a successful demand for liberty is a story of our own. British colonists took up arms, got the word out to other angry colonists, and revolted against King George and England. If it weren’t for the American Revolution, we wouldn’t be here today. That’s why the First Amendment and Second Amendment are engrained in our nation’s Constitution. We just wonder if things would be different for Hong Kong and Venezuela if their people were granted the same liberties as the United States.

We should never take our rights for granted! Forgetting our great history and the liberties granted to us by our Founding Fathers may be the beginning to an end of the free nation that we take pride in.