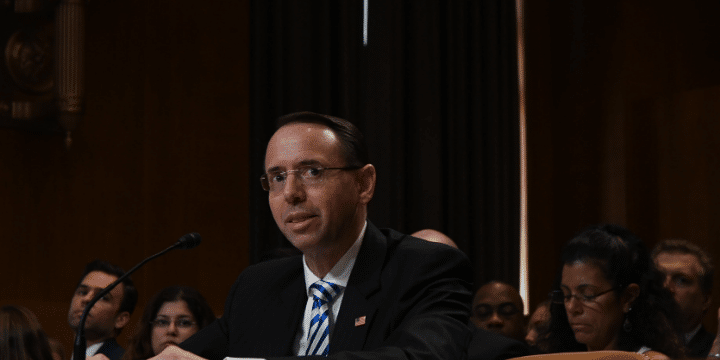 Deputy Attorney General Rod Rosenstein announced that he is leaving his role in the next few weeks, a move that Tea Party Patriots Citizens Fund has been calling for. Rosenstein has blocked Congress’ efforts to provide legitimate and constitutional oversight to the Justice Department. He has also allegedly said he would secretly wear a wire to record President Trump and also discussed recruiting cabinet members to invoke the 25th Amendment as a means to remove the president from power. His actions show that he was not on Team Trump from the very beginning and never intended to drain the swamp.

“Rosenstein should resign not just because The Times reported he suggested secretly recording the president and recruiting cabinet members to invoke the 25th Amendment, but because he has acted to block Congress’ efforts to provide legitimate and constitutional oversight to the Justice Department,” TPPCF Chairman Jenny Beth Martin wrote in The Hill last year.  He has withheld documents from congressional overseers, made misleading statements to Congress, and defied multiple congressional subpoenas. He has not served President Trump well, and this latest revelation is merely the icing on the cake. Rosenstein should step down now.”

While Rosenstein was never criticized by Trump as heavily as Sessions was, Trump has cited how Rosenstein signed a FISA surveillance warrant for former Trump campaign adviser Carter Page. The president has repeatedly decried the DOJ and FBI’s efforts to obtain that surveillance warrant, while blasting the Mueller probe Rosenstein previously oversaw as a “witch hunt.”

Meanwhile, Rosenstein has sparred with Republicans in Congress, especially former House Intelligence Committee Chairman Devin Nunes, R-Calif, over “slow walking” its response to document requests. The House Freedom Caucus last year drafted articles of impeachment for Rosenstein, describing that effort as a “last resort” if their demands for records were not fulfilled.

Trump nominated Rosenstein to the post in 2017. Prior to this role, Rosenstein worked as the United States attorney for the District of Maryland.

Rosenstein has undermined congressional investigations, has ruined the credibility of the Justice Department, and has proven that he wasn’t a Trump supporter from the start. Rosenstein would be wise to step down and to allow for another to step in and oversee the responsibilities without extreme bias dictating his actions.