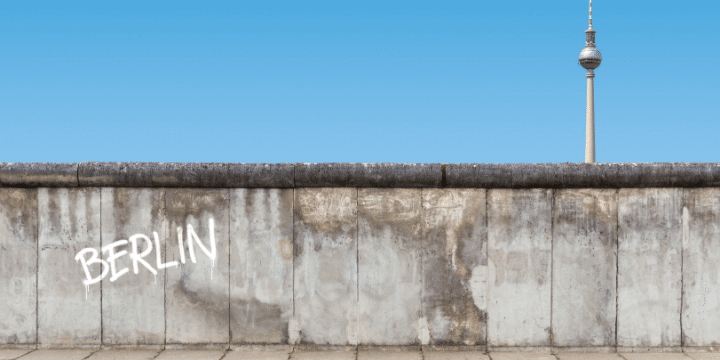 In any consideration of the use of force – and constructing a wall is a kind of force – we must examine the moral element. To suggest otherwise is to suggest that the hero who pushes the little old lady out of the way of the oncoming bus is no better than the evil man who pushes her into the way of the oncoming bus, because both men like to push around little old ladies.

Nevertheless, some people who oppose a wall along our southern border have asserted a moral equivalence between the two. This kind of hyperbole is obviously ridiculous, but we thought it might be useful to get the input from a real expert – someone who actually lived behind the Berlin Wall and had to escape to freedom. So, don’t take our word for it. Read the words directly from one of our supporters.

My escape out of the German Democratic Republic (Communist East Germany) was a long time ago, but I still remember the details. First of all, the barriers were built to prevent citizens from leaving the country – not to keep people out!

There were two types of barriers in place. The first one is the well-known Berlin Wall which prevented East Germans from entering West Berlin. This was accomplished by building a wall all around West Berlin- which essentially then became like an island in the middle of East Germany. If someone on the eastern side would have wanted to leave, that person would have been watched from guard towers armed by guards with machine guns, search lights and communication equipment. If someone would have been successful in getting over that wall he would have been impaled by sharp spikes on the other side. Then came the mine field which had to be crossed. Next came a strip of totally open area which was illuminated with many lamp posts when dark. Anyone in there would be shot dead! After that came a barb wire entanglement fence loaded up with razor wire. Lots of luck getting over that one and that fence was still in East Berlin – no one from the west could come to help.

The second type of barrier was the long (over 800 mile) border between East and West Germany. We on the east side were not allowed to come close to the border. There was a 5 kilometer (about 3 miles) off-limit zone for ordinary citizens. Only people who lived there in villages and agricultural workers with special permission were allowed to be in that area. The actual border did not have a wall made out of concrete and steel but was most effective at keeping people in by having multiple layers of security. The first objects one would see were a series of watchtowers strategically located so there never was a blind spot. Between them was a strong military type barbwire fence. Then came a strip of barren soil where nothing was allowed to grow in order to detect fresh footprints. Next came the minefield. They also had fence posts with self-shooting devices attached to them. A trip wire would set them off (to the detriment of some birds) when an explosive charge, in shotgun type fashion, would detonate horizontally cutting people to shreds. There also were many armed guards with dogs patrolling between the towers. In some locations deep, anti-tank ditches were constructed to prevent vehicles from crashing thru the barriers.

I did get out in 1955 when it was not quite as difficult and consider myself very lucky to have become a legal citizen, living the American dream.

When we asked him if he supports a wall at our southern border, considering everything he went through as a person trapped in his own country, behind a wall, he was emphatic in his support. Our supporter understands – more clearly than anyone who hasn’t actually experienced living in a communist, authoritarian country – that a wall or a physical barrier on our border used to block criminals, drug cartels, human traffickers, etc. from entering our country in secret; a barrier that allows Border Patrol to more effectively and efficiently do their job of processing the people who want to immigrate to America for a better life and for opportunity; is the complete opposite of a wall meant to trap people in a country run by a totalitarian, communist regime intent on ruling over their citizens with an iron fist.

East German officials did not want to let people leave. President Trump wants immigrants – he just wants them to come in legally, in an orderly fashion, so we know who is entering the country.

Here is our supporter, in his own words again:

I support building the wall on our border because walls work, and the security of the citizens of any country must be a top priority.

I also resent the illegal immigrants who sneak in and stay, or who overstay their visas because I immigrated the correct way, and went through the process to become a legal citizen.

Our country is a better place because this man immigrated (legally) to America, and the Democrats and liberals owe it to this man to fund border security and build the wall.

Feel free to share and link to this blog post whenever you see someone make this absurd accusation.