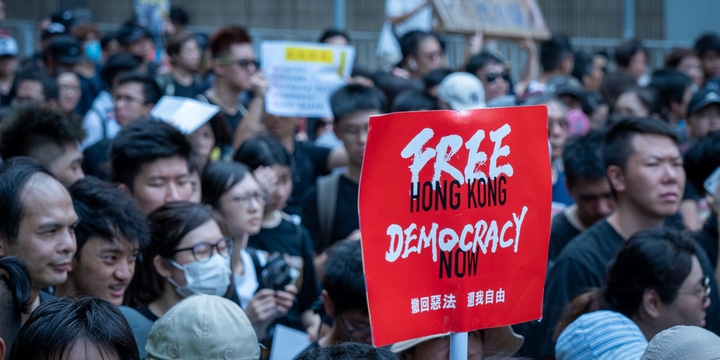 COVID-19 has exposed the Communist Party of China as liars who likely could have prevented much of the current pandemic, if they had been honest. President Trump is taking action against the CCP and pursuing an aggressive foreign policy that would prevent China from exploiting America.

Helen Raleigh writes in the Federalist:

In an announcement on July 13, U.S. Secretary of State Mike Pompeo proclaimed, “Beijing’s claims to offshore resources across most of the South China Sea are completely unlawful, as is its campaign of bullying to control them.”

Pompeo remarked this policy shift, from the initial stance of neutrality to directly calling out Beijing’s intrusive behaviors, was necessary to uphold international law.

On July 14, President Trump signed the Hong Kong Autonomy Act, enabling the U.S. government to impose sanctions on Chinese officials and businesses that have either aided or abetted the enforcement of Beijing’s new security law in Hong Kong. In a rare event in today’s divided country, the legislation was passed Congress earlier in July with overwhelming bipartisan support.

Trump also signed an executive order revoking the special trading status the United States had maintained with Hong Kong since 1997, when the United Kingdom handed the city back to Beijing’s control under the “One Country, Two Systems” framework. Trump’s executive order comes as a policy response to Pompeo’s earlier certification in May that Beijing has reneged on its promises and undermined Hong Kong’s autonomy.

Then, on July 15, Pompeo revealed that the United States will place visa bans on employees of Huawei and possibly other Chinese technology companies for “their role in enabling human rights abuses at home and abroad.” This announcement came only one week after the Trump administration imposed sanctions on several senior officials of the CCP, accusing them of playing key roles in human rights abuses against Uyghur Muslims and other religious minorities in Xinjiang, China.

On July 16, U.S. Attorney General William Barr derided American universities, Hollywood, and big U.S. tech companies for kowtowing to CCP’s regime in a major Chinese policy speech at the Gerald R. Ford Presidential Museum in Grand Rapids, Michigan. Barr warned American business leaders that “Appeasing the PRC may bring short-term rewards, but in the end, the PRC’s goal is to replace you.”

These are concrete actions by the Trump administration that hold the CCP accountable for their domestic oppression and bullying abroad.