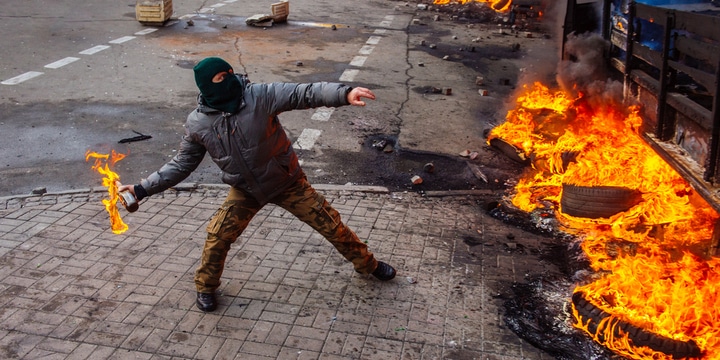 While the media wants you to believe the protests rocking America are peaceful, nothing could be further from the truth. Last weekend showed that these supposed protests are rioters focused on destroying, not rebuilding. Vandalizing property and threatening innocent people needs to stop.

“Riots broke out again this weekend from coast to coast, with violence and vandalism damaging more of urban America. Democrats and their media allies insist these are largely peaceful protests, so it’s worth examining what really happened.

On Saturday in Seattle, protesters gathered outside the juvenile court and detention facility, set fire to portable trailers, and smashed the windows of nearby cars and businesses. An explosive device gashed an eight-inch hole in the side of the Seattle Police Department’s East Precinct, and rioters threw fireworks, stones and other projectiles at law enforcement.

Similar scenes unfolded in Portland as rioters tried to tear down the fence surrounding the Hatfield Federal Courthouse. Demonstrators threw Molotov cocktails Friday night, and after midnight one federal officer took “a direct hit from a commercial grade firework,” another “was hit with a mortar firework,” and a third “was struck in the head with a mortar firework,” the Department of Homeland Security says. Peaceful?

In Louisville, Ky., a black militia that calls itself the “Not F— Around Coalition” lived up to its name Saturday when a member discharged a gun and accidentally struck three compatriots, causing non-life-threatening injuries. In Oakland, Calif., rioters set fires downtown Saturday night, including at the Alameda County Superior Courthouse. In New York City, demonstrators defaced police vans with spray paint and tried to smash their windows, while others lit trash cans on fire. Demonstrators carried out more vandalism at a federal building in Atlanta and a Fraternal Order of Police lodge in Baltimore.

The weekend’s events were a deliberate assault on public and private property, law enforcement, and public order. Lawlessness begets lawlessness, and in recent weeks we’ve seen reports of vigilantes and far-right activists joining the melee from Richmond to Philadelphia. Local officials are allowing this disorder to occur, and the more it is indulged the worse it is likely to get.”

Progressives have been encouraging these riots for months now, even though it is clear they are violent and destructive. Enough is enough; we need leaders like President Trump who are unafraid to stand up to rioters.