State of the Union – Bingo

Another January, another State of the Union address. We know what that means … for the last six years, anyway: More rhetoric about “investing” rather than “spending,” “revenue enhancements” rather than “tax hikes,” and the fight against “violent extremism” rather than “radical Islam.”

Barack Obama will go down in history for many things, but perhaps his most significant “accomplishment” is the Orwell-ization of the American language that has taken place on his watch, aided and abetted by his Administration’s official spokesmen.

Print out the form, pour yourself your favorite libation and settle into your most comfortable chair. Fill in the Bingo blocks as you hear the President utter the corresponding words, and play along.

If/when you successfully fill out a straight line (vertically, horizontally, or diagonally) and score Bingo, take a picture of your completed SOTUBingo! Card and tweet it to @TPPatriots. 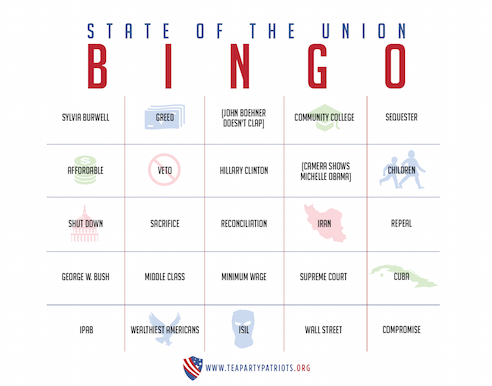