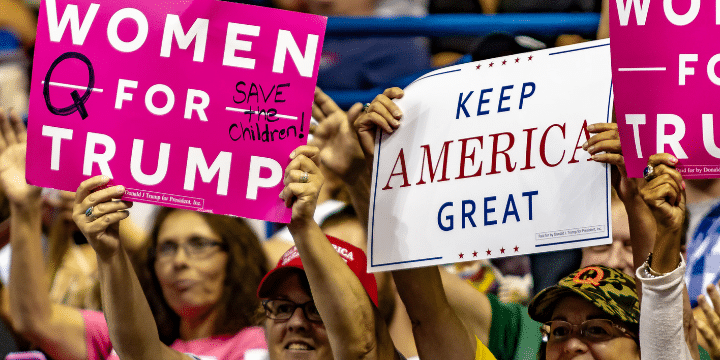 On Sunday, America celebrated 99 years of the 19th Amendment granting women the right to vote. In 1920 when the 19th Amendment was ratified, their votes helped deliver a Republican majority. But that was the 20s, and now we’re in an era of ever-changing parties and women being slated to vote with the Democratic party. Why? Is there something about the Democratic party that is pro-women? Since President Trump was elected, his policies have been more pro-women than the policies championed by former President Obama.

The media won’t report that, and the ongoing harassment from Democrats to women voters is, “Vote against Trump in 2020, or you’re a traitor to women in general.” Women should be insulted by that behavior. Fortunately, there are women, a lot of them, who see the good things President Trump’s policies have done for them and disregard Democrats’ bully tactics.

Katrina Pierson has the commentary:

Trump has achieved the strongest overall economic growth since the start of the Great Recession, and he’s made sure that this time the prosperity is shared by ordinary Americans, especially women, and not just the ones with jobs on Wall Street.

With unemployment holding steady in the mid-3% range, Americans are enjoying the lowest jobless rate since 1969. Women are doing even better, achieving a 3.6% unemployment rate last year, the lowest female unemployment rate since 1954, when far fewer women were in the workforce. And the jobs being created in the Trump economy are good ones, too — wage growth is beating inflation consistently for the first time in decades.

Meanwhile, our roads, bridges, tunnels, rail links, seaports and dozens of other fixtures of American infrastructure are in a sad state. With overwhelming public support, Trump has tried to get Democrats to help pass a bill to fix it. Instead of helping, the Democrats in Congress have played politics for almost three years, determined to show their base they can “#resist,” even when that means refusing to invest in the tools American industry needs to succeed.

The president’s record speaks for itself, and it’s a record that women can feel confident voting to extend. This is just the beginning; there is much more important work yet to be done. Another four years will mean Donald Trump will have the political capital to get Congress to finally enact a paid family leave plan and child care funding that will allow millennial women with careers to start a family on a solid financial footing.

The economy is booming and jobs are more available now to women than they were a few years ago. More women have been employed as top advisors to President Trump than during Obama, Bush and Clinton’s presidency. President Trump is a president for women and pro-women policies and he will be re-elected for those reasons.