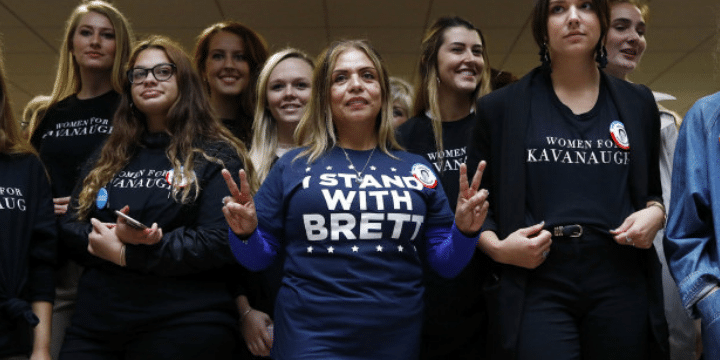 After a long and exhaustive process, Brett Kavanaugh has been confirmed and sworn in to the U.S. Supreme Court. On his first day as a justice, he hired an all-female class of law clerks—making more than half of the Supreme Court’s law clerks women for the first time in history. He is a justice for women and many women saw the left’s attempted partisan-driven character assassination for what it was. Women gathered at the ceremonial swearing in of Justice Kavanaugh to show their support for a man whose career was almost ruined by baseless accusations.

Tea Party Patriots Citizens Fund Chairman Jenny Beth Martin joined Concerned Women for America President Penny Nance at the ceremony and showed support for a man who has throughout his career supported women’s rights and has hired a record number of women regardless of their points of view.

It was an exciting time celebrating with @PYNance at the ceremonial swearing in of Justice Kavanaugh. #TeaParty pic.twitter.com/tZCt81Mr7v

While the left screamed, shouted, and threw tantrums on the Hill, the women in support for Kavanaugh remained composed even when the odds seemed to not be in Kavanaugh’s favor.

Enjoyed meeting this incredible group of kind and friendly “Women for Kavanaugh.” What a difference from the other violent protestors we’ve seen around here… pic.twitter.com/pTl3Cv3Fq6

Went with some interns to do a lap around the Capitol during the cloture vote, and I can't even begin to explain the power of this sign. Every 50 yards we were stopped – not by hysterical protestors, but by regular people. Men, women, kids. All thankful for our presence. pic.twitter.com/agCcHN5oFw

These are the women that the liberal media doesn’t want you to think exist. Too bad for the left, these women are real, they are mobilized, and they are voting in the midterm elections.