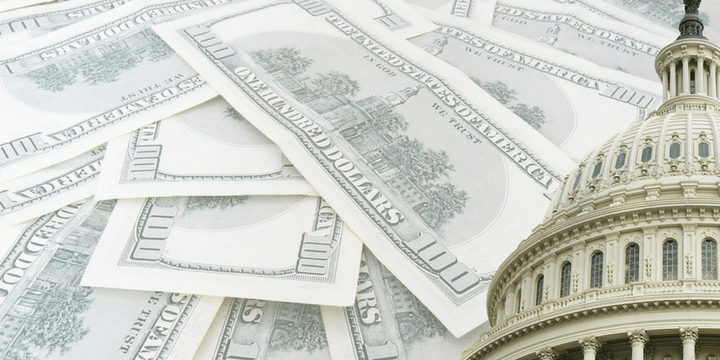 The fiscal year of 2018 ended on Sunday with the national debt rising to $21.516 trillion, with $1.2 trillion borrowed this fiscal year.

On the last business day of fiscal year 2018, which was Friday, Sept. 28, the total debt had grown to $21.516 trillion. Friday was the first day in history the national debt rose above $21.5 trillion.

The increase is just the latest sign that borrowing is on the rise.

The budget deficit alone is set to soar above $1 trillion by 2020, as they did during President Obama’s first term. But the federal borrowing also takes place outside its formal budget, including for various loan programs, and the pace of growth in the debt has already exceeded $1 trillion per year at times.

In addition to the $1.2 trillion increase in the national debt in the last fiscal year, it took a little more than six months for the debt to rise from $20 trillion to $21 trillion.

Conservatives in Congress have complained that spending remains unchecked, which will lead to only higher deficits in the years to come. But they could only watch in February when GOP leaders and President Trump reached a two-year spending deal that is set to boost federal spending by a total of $300 billion in fiscal years 2018 and 2019.

Currently, every person born in America owes over $200,000 to the national debt. If Congress doesn’t get deficit spending under control, future generations will be living in a bankrupt nation where Washington continues to raise your taxes to fuel its out of control spending.