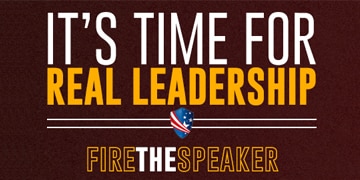 A few days ago, Senate Minority Leader Mitch McConnell told the New York Times that in 2014, conservative insurgents – meaning Tea Party supporters – have no chance against his GOP establishment. “I think we are going to crush them everywhere,” said McConnell. [1]

We’ve got news for the 30-year Senator from Kentucky: if the GOP establishment learned to fight for conservative principles every once in a while, his title might be “Majority Leader” instead of “Minority Leader.”

It’s in large part because of the Tea Party movement that the Republican Party even has the majority in one-half of Congress. Yet McConnell and his counterpart in the House of Representatives, Speaker John Boehner, continually capitulate to President Obama, Harry Reid and their liberal agenda, and refuse to stand firm on conservative values.

Under their leadership, Congress has fully funded Obamacare, which continues to increase health care costs and limit care options for Americans around the country. McConnell and Boehner caved to President Obama on the issue of tax increases, and raised the debt limit without any spending cuts.

Where is the conservative leadership? On Capitol Hill, any bill worth praising that passes the House is put under the proverbial lock and key in the Senate by Majority Leader Harry Reid. Where is McConnell?

Instead of resorting to juvenile threats to “crush” the Tea Party, the Republican leadership should focus on what it was sent to Washington to do: look out for Americans’ interests. That means defeating Obamacare. It means stopping the IRS’ persecution of law-abiding citizens. It means stop the runaway spending and ballooning national debt that steals from the future of our children.

Time and time again, McConnell and Boehner have proven they won’t fight to protect your money, defend your freedom and your rights, and provide the best opportunities for you and your family to succeed.

It’s time for new leadership. Send a message to the elites in Washington that enough is enough. Sign our petition at firethespeaker.com and send the message that you are ready for leaders that support your freedoms again.