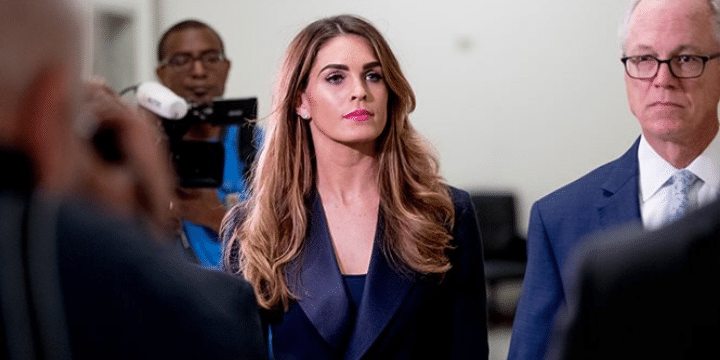 In a shocking turn of events, a full CNN panel is actually criticizing the Democrats. Hope Hicks, former member of the Trump Administration, appeared in front of the House Judiciary Committee on Friday.

It was a closed-door hearing, meaning no press or spectators were allowed inside. According to the hearing transcript, Ms. Hicks’ lawyer asked the Committee Chair, Rep. Jerry Nadler, to have everyone in the room refrain from taking pictures of Hicks. Meaning, Democrat representatives and their staffers were taking pictures of Hope Hicks, and being noticeable enough about it to make her uncomfortable while delivering testimony. Putting aside the fact that these hearings are a sham, why would Democrats be openly taking pictures of a witness if they’re so serious about these investigations?

When even CNN is calling the Democrats out on their behavior, you know they messed up. Additionally, Rep. Nadler called Hicks “Ms. Lewandowski,” referring to her alleged ex, who worked on the Trump Campaign, three separate times. It’s clear the Democrats are just here for the media circus and to poke fun at this administration, rather than conduct a serious (yet bogus) investigation.

A 273-page transcript of the private hearing was released on Thursday night, revealing that committee chairman Nadler addressed Hicks by the last name of President Donald Trump’s former campaign manager, Corey Lewandowski, three times. Nadler is likely to have called Hicks, “Ms. Lewandowski” because of a rumor she had an affair with Lewandowski, who is married with four children, during the 2016 campaign.

CNN’s John King mentioned how Speaker of the House Nancy Pelosi (D., Calif.) said the House’s Democratic majority would use their power to conduct investigations that were “serious, credible, and prepared.” He then read the transcript of Hicks’s lawyer calling on Nadler to ask everyone in the room to refrain from taking pictures of Hicks, adding he believed Hicks was feeling “uncomfortable.”

“Why are congresspeople taking pictures of a witness? If you’re having a serious, prepared, thorough investigation, what is that all about?” King said. “For the conversation, Nadler himself, who called off the picture-taking there, repeatedly referred to her as Ms. Lewandowski. Corey Lewandowski was the campaign manager.”

“He fought to get her testimony. He knows her name is Hope Hicks. At one point she said, ‘My name is Ms. Hicks, Mr. chairman.’ If you’re going to make the case to the American people that you’re conducting  serious, credible, investigations and you’re prepared, why be amateur and offensive?”

“On the Lewandowski thing, there is a big debate about whether it was intentional, a slip of the tongue, whatever. Either way, any woman being called something other than their name, being called ‘Ms. some other man’s name,’ it’s offensive. Hope Hicks would be right to be a little shaken by that and I think it’s an unforced error on Nadler’s part,” Phillip said. “He probably at this point ought to apologize to her because now that it’s out there it’s becoming a source of criticism among Hicks’s defenders who say, ‘This is proof Democrats aren’t being serious, that they won’t even be  respectful to a woman in this context. I don’t know what was in his mind, but he should probably explain it to people at this point.”